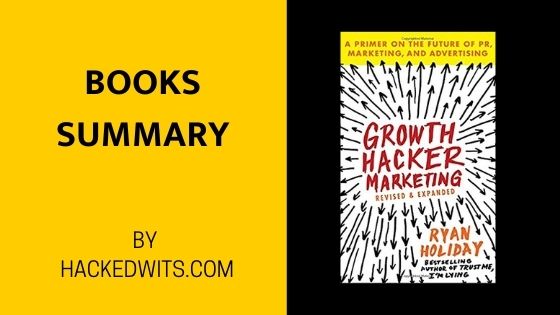 The industry of Marketing is changing significantly. Marketing has undergone a transformation with the integration of Data Collection and Analysis and running experiments, and observing the effects of Marketing. This new branch of Marketing is called Growth Hacking.

What is Growth Hacking

Growth Hacking is a form of lean marketing and has seen rapid popularity in the Segment. Growth Hackers are basically a hybrid of coder and marketer. The huge in this segment is because marketing used capital intensive, and it was not something that could be tracked in terms of ROI.

Growth Hacking has changed this completely; it used to find ways and hacks that use less capital but give exponential growth once successful. This growth is then self-sustained. You must have seen or listened to growth team terms: it is basically a team of coders, marketers, UI/UX designers, Product Designers.

The team like these have significantly found their way in the start-ups due to low cost and high effectiveness approaches. Growth hacking has made traditional marketing irrelevant or at least completely rewritten its best practices.

The Book has decided to focus on the Mindset approach, which is equally important for the field. A growth hacker doesn’t see marketing as something one does, but rather as something one builds into the product itself.

The tools of the Internet and social media have made it possible to track, test, iterate,and improve marketing to the point where these enormous gambles are not only unnecessary and counterproductive.

Draper happened accidentally on growth hacking. “Could you,” he asked, “put a message at the bottom of everybody’s screen?” “So put ‘P.S.: I love you. Get your free email at Hotmail’ at the bottom. This little feature changed everything. It meant every email that Hotmail’s users sent would be an advertisement for the product.

By December 1997, with nearly 10 million users, Hotmail was sold to Microsoft for $400 million. It took just thirty months from launch for Hotmail to accumulate its thirty millionth user.

First, Google built a superior product. Then it built excitement by making it invite-only. And by steadily increasing the number of invites allowed to its existing user base, Gmail spread from

person to person until it became the most popular, and in many ways the best, free email service. Email. Data. Social media. Lean methodology has bred new rock stars of the Silicon Valley.

Airbnb had a good idea in 2007. The founders could have spent all their time and energy trying to force the “let people crash on your floor and feed them breakfast.” Instead,they treated their product and service as something malleable and were able to change and improve it until they found their best iteration.

A traditional marketer thinks of precisely zero times when we went back to the drawing board after seeing a less-than-stellar response. The best way to get to Product-Market Fit is by starting with a “minimum viable product” and improving it based on feedback instead of what most of us do, which is to try to launch with what we think is our final product.

Today, it is the marketer’s job as much as anyone else’s to make sure Product Market Fit happens. Isolating who your customers are, figuring out their needs, and designing a product that will blow their minds are marketing decisions, not just development, but also a design choice.

The growth hacker helps with iterations, advises, and analyzes every facet of the business. We must and repeatedly question every assumption. Who is this product for? Why would they use it? Why do I use it?

Ask your customers questions, too: What is it that brought you to this product? What is holding you back from referring other people to it? What’s missing? What’s golden? Don’t ask random people or your friends—be scientific about it. The next step is to bring the customers in

What do Growth Hackers do?

Growth Hacker -a job isn’t to “do” marketing as I had always known it; it’s to grow companies really fast—to take something from nothing and make it something enormous. They have out the playbook of traditional marketing and replaced it with only what is testable, trackable, and scalable.

Their tools are emails, pay-per-click ads, blogs, and platform APIs instead of commercials, publicity, and money, Tactics. Instead of bludgeoning the public with ads or dominating the newspapers’ front page to drive awareness, they used a scalpel, precise, and targeted to a specific audience.

The new marketing mindset begins not a few weeks before launch but, in fact, during the development and design phase.Start by testing until we can be confident we have a product worth marketing. Growth hacking still requires pulling your customers in. Except you seek to do it in a cheap, an effective, and usually unique and new way.

Did you know Dropbox crafted a demo video that walked potential users through the service ads. They made the video themselves, and they made the right one for the right place.

This one-minute video, combined with a very cool interface that showed users how many other users were in front of them on the app’s waiting list, created a spectacle that drove an enormous amount of social chatter and blog attention. The point is, you’ve got to find something new and exciting and channel that energy toward exploding on the market with your product.

A very common question: Where do I find the right people? If this isn’t immediately obvious to you, you don’t know your own industry well enough to consider launching a product yet.

You can reach out to the sites you know your potential customers read with a pitch email. You can upload a post to Hacker News, Quora, or Reddit yourself. You can start writing blog posts about popular topics that get traffic and indirectly pimp your product. You can use the Kickstarter platform for exposure and bribe your first users with cool prizes.

The point is: do whatever it takes to pull in a small contingent of initial users from your particular space. Sometimes “stunts” are a great way to do that. It’s often about exploiting.

“The more innovative your product is, the more likely you will have to find new and novel ways to get at your customers

The Engineers at Airbnb a set of tools that made it possible for every member to seamlessly cross-post their Airbnb listing on craigslist (because craigslist does not technically “allow” this, it was a fairly ingenious workaround).

As a result, Airbnb—a tiny site—suddenly had free distribution on one of the most popular websites in the world. Users have to be pulled in. A good idea is not enough. Your customers, in fact, have to be “acquired.”

But the way to do that isn’t with a bombardment. It’s with a targeted offensive in the right places aimed at the right people to Destination. Once we bring our first customers in, our next move is to set about turning them into an army.

How to go Viral

A growth hacker should keep on asking questions like, “Well, why should customers do that? Have we actually made it easy for them to spread your product? Is the product even worth talking about?. Thinking about such questions will lead to product refinement and result in a better product.

Only a specific type of product or business or piece of content will go viral—it not only has to be worth spreading; it has to provoke a desire in people to spread it. Virality, at its core, is asking someone to spend their social capital recommending or linking or posting about you for free.

The best way to get people to do this enormous favor for you? Make it seem like it isn’t a favor. Make it the kind of thing that is worth spreading and, of course, conducive to spreading. A classic example is Groupon, it’s “Refer a friend” and you get $10 when your friend makes his or her first purchase. This can be found on every e-commerce site.

Think of Apple and BlackBerry, which turned their devices into advertising engines by adding “Sent from my iPhone” or “Sent from my BlackBerry” to every message sent. A growth hacker will look for ways to get this social currency for free.

The same referral system, which Sean Ellis introduced and used for Dropbox, increased the sign-ups by 60% and has 2.8% million users added just through referrals. Today 35% of customers come from Referrals.

If you want to go viral, it must be baked into your product. There must be a reason to share it and the means to do so. This is not easy. Keeping our growth engine going is a step unto itself. We must dive deeply into the analytics available to us and refine, refine, refine until we get maximum results.

A Growth Hacker’s job is not just to bring in potential customers but to create lifelong users. It turns out that a happy customer acts as a marketing tool itself. There is no use in having a bunch of new customers through marketing channels if they immediately leak out through a hole in the bottom?

Josh Elman cites his journey on Twitter. At the time Twitter was not performing well. John analyzed the data and saw that Twitter suggested a random 20 users follow on the platform that the user did not find engaging enough. Then Josh changed the U.I. in which the Users were shown the accounts to follow based on their interest and hobbies, which increased the engagement on the platform, and later Twitter grew to what it is today.

Growth hackers know this, and that is why they are trying new iterations constantly. Ryan says forget the conventional wisdom that says if a company lacks growth, it should invest more in sales and marketing. Instead, it should invest in refining and improving the service itself until users are so happy that they can’t stop using the service.

When Ryan was traveling for a conference in a different city, the event organizers gave all the speakers a $50 Uber gift card. (In other words, a viral referral feature.). In the end, Ryan finally ended up using an Uber ride to reach the conference.

After the ride, Uber kept me engaged by asking me to rate my driver, and then it sent me a coupon via email. This is called retention and optimization. But it’s always better for businesses to retain and optimize what we already have.

It’s always better off rolling out new features that get more out of your customer base, that turns potential users into active users, than going out and pounding the pavement for more potential. You’re better off teaching your customers how to use your product—spending time,

Growth hacker approach, what else can? If you can treat a book like a start-up, anything is game. We’re no longer dependent on the guessing game. Instead, we can grow our businesses by iterating, by tracking success, by doing whatever we can to bring people into our funnel.We can spend our budgets on product improvements instead of additional advertising.

How to learn Growth Hacking ?

To start learning more about the field of growth hacking you can follow the below reference to to get better understanding.